The Case for Stomach Sleeping

Recently, I've encountered a rash of clients with slipped vertbral discs and also breast feeding mothers. These two populations may not seem to be related, however they both had similar chronic lower back pain symptoms. Both groups need to stretch their respective lower backs for extended periods of time to funtion properly during the day.

Modified--I repeat--modified stomach sleeping has been helpful to most of these clients and one's with larger breasts. I recommend sleeping with a pillow under their abdomen and hips two nights a week and see how their lower back feels afterward. The pillow also had to maintain some thickness and not simply collapse under the client's weight after a few hours of sleep. Honestly, they loved it and were overcomplying by stomach sleeping too often.

For some people the cons can be greater than the benefits with this sleep position. One of the negatives are an over-flattening of the curves in the spine overall which is unhealthy for the vertebral joints. Also, having one's neck to the side for eight hours a night, without an equally supportive stack of pillows, can strain neck muscles that are previously strained from an injury. 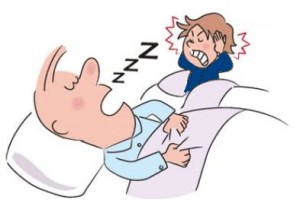 An unexpected benefit of stomach sleeping is that it should reduce snoring, which can be caused by your tongue rolling to the back of your neck. So have mercy on your lower back, and the people sleeping near you, by trying this unpopular sleeping postions a few nights a week.

Makka Ho stretches were created by Shizuto Masunaga to facilitate the flow of qi to different organ systems in the body.